Aberdeen's Catholics did not fare very well after the Reformation; not only were all the monastic orders based in the Green and Schoolhill chased out of the city, and great vandalism was done to all Catholic churches including St. Machar's and St Nicholas, but a Trinitarian monk, Brother Francis, was murdered by the vicious mob who set fire to his church and left his beaten body to be consumed by the flames.  It was no surprise then that masses and other episcopal duties were performed out of sight of Protestants in the houses of Catholic noblemen like Thomas Menzies of Pitfodels who owned a great stone dwelling in the Castlegate.

In 1771, the Roman Church's fortunes were to change for the better - Bishop James Grant was able to persuade William Young, a staunch Catholic and local merchant to bid for the derelict property of the Smiths of Inveramsay in Justice Street, off the Castlegate.  Formerly known as Skipper Scott's Close, after a prominent sea captain who was also a Jacobite supporter and 'out' in the 'Fifteen' with the Old Pretender, James III, it had been used as a lodging house and 'gin land' by the tenants of Inveramsay Court.  Young was pleased to help, and the Bishop able to move into his new lodgings once the old property was demolished in 1774.

By the end of the 18th century, Aberdeen had already lost two bishops to old age, Bishops John Geddes and John Gordon, the latter being one of two of Bishop Geddes' nephews.  The other nephew, ordained as a priest just five years earlier, was Charles Gordon.  It was he, affectionately known by Catholic and non-Catholic alike as Priest Gordon - the first parish priest for many a long year.  He would serve as the incumbent from 1799 until his death in 1855, working until his dying day for the poor and needy of Aberdeen.

Priest Gordon was what we would call 'a couthy mannie'; born near Enzie in Banffshire, he spoke the broadest Doric to all and sundry.  He loved the poor, especially children, and used his vernacular charm to great effect in securing donations from those who could afford it to pay for the building of not only a new church in what was now named Chapel Court, but later for a school and orphanage which would become the forerunner of St Peter's R C School in King Street to this very day.

In 1803, having raised quarter of the money from his congregation, and the rest from his noble friends whom he believed 'The Blessed Virgin had laid it on their herts to gie to the chapel,' Priest Gordon had his prayers answered - High Mass was celebrated in the city for the first time since the Reformation.  A victory over prejudice and bigotry for this couthy mannie!


Professor of Divinity, William Clark wrote a fine biography of Priest Gordon, demonstrating that although he loved his fellow man and woman, he did not suffer the reformers gladly!  Prof Clark recalls as a student listening to Fr Gordon denounce the Protestant leading lights of the Reformation:


Martin Luther and John Knox were held up to universal execration in the most delightful broad Scotch and with a vehemence that might have satisfied the Grand Inquisitor. Occasionally these attacks produced bursts of merriment from his protestant hearers, and, if these became audible—which they sometimes did—the author was ejected by the sexton.

Priest Gordon did not stop short of criticising the dead, he went for the living too!  He was often heard to be sparring verbally with Church of Scotland minister, Dr William Kidd, incumbent of the old Gilcomston Church in Summer Street (now empty, was the former Denburn CofS).  Local Catholic historian, Monsignor Sandy MacWilliam reports:


Once they were discussing the doctrine of Purgatory. Dr. Kidd declared it preposterous, a mere figment of the ecclesiastical imagination, having no place in scripture and so on—’Weel’, said the priest, ‘a’ I hiv tae say, Doctor is that we can gang farrer and fare waur!’

But the 'crowning act of his life' according to Monsignor MacWilliam, was the school.  Priest Gordon took on the challenge of education in 1831 after the death of James Barclay, one of his congregation, who had been teaching Catholic children in a small school in Longacre, on the ancient lands of the Greyfriars.  The school, which had two wings added to the original plan to serve as an orphanage, was again funded by the most generous donations of friends and parishioners alike.

Priest Gordon lived at the school as he got older, but still worked on with a powerful spirit which inspired such confidence in the serving bishop, that they left him to it, perhaps a little feart that his vitriolic rhetoric reserved for Tyndale and Zwingli might easily by turned on them at a moment's notice!  Bishop Kyle finally persuaded Father Charles to retire in 1854, but that was the end, unable to work for his parish, he gave up the ghost - the beloved Priest was dead by 1855.

Charles Gordon was 84 years old at his death!  Yet his work was his testament, he never boasted of his achievements, they spoke volumes for this country priest.  His funeral procession was said to stretch from Justice Street all the way to the Snow Kirkyard in Old Aberdeen, and  people were still joining it as he was laid in the same grave as his brother and uncle who had passed away sixty years before.  What a triumph that this kindly soul whose faith was of the most practical kind, that he should be buried in what had been Bishop Elphinstone's parish church, St Mary ad Nives, built in 1498 for the ordinary folk of his new university town.  Like him, Elphinstone was a man away ahead of his time, offering medicine as a subject alongside the traditional vocations of law and divinity before any other university in Scotland, and full of encouragement for learning and development.  Although the reformers Priest Gordon despised had enticed the politic Dr William Guild into destroying the Snow Kirk to show his 'support' for the Covenant, the Catholics of the city eventually had the ruin reconsecrated as a cemetery for their own.

Priest Gordon and his family have the tabletop tomb in the centre of the Snow Kirkyard, and below them, the ancient grave of Sir Gilbert Menzies of Pitfodels, whose family had continued to support the work of their outlawed church long after the Reformation.  The last of their line, John of Pitfodels, gave his house to be used as a Catholic Seminary.  Priest Gordon aided John Menzies in converting the house for its new purpose from 1827 - we know it today as Blairs, in use from the mid-19th century until 1984.

Priest Gordon has a better monument - the modern day descendant of his school in King Street, where stands his statue in the garden.  He is dressed in his priestly robes, his hands together in an attitude of prayer.  I'd like to think he was ever thanking the Almighty and the Blessed Virgin for that couthy, kindly charm of his which inspired so many to fund his charitable works. 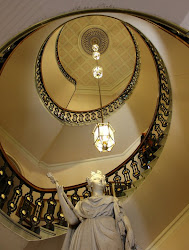 Sherlock Holmes and the Adventure of the Jacobite Rose
by Fiona-Jane Brown
This is the play I wrote - my first publication ever - I encourage people to get a copy on Amazon or Kindle!

Knots and Crosses
by Ian Rankin

Black and Blue
by Ian Rankin

Hide and Seek
by Ian Rankin